TITNORE WOODS IS ON ALERT
The future of Titnore Woods is threatened as Tesco and Worthing Council gang up to build upon the ancient woodland... 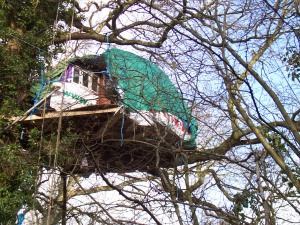 The Titnore Woods campaign began in 2002 with the aim of protecting the ancient woodland from the threat posed to it from yet another Tesco coupled with a housing development. In 2006 it took to the trees in 2006. Its future is currently hanging in the balance as it is in danger of being served an eviction notice if the West Durrington Consortium is given the go ahead for its development plans at the Worthing council meeting planned for March 2010.

You would think one good reason should be enough to stop the destruction of the forest; well in that case the following should constitute a guarantee. The construction of the proposed project will eliminate one of the only the remaining ancient woodlands on Sussex's coastline - the other, Binsted Woods at Arundel, is also threatened by a proposed development. The area within Titnore is rich in flora and fauna. The land lies under the shade of Birch, Elm, Beech, Maple, Oak and Bluebells. The Woods house species such as Goshawk, Dormice, White Admiral Butterfly, Yellow-legged Clear wing Moth, Purple Emperor, Silver-washed Fritillary Butterfly and the Giant Ichneumon Wasp. A construction of cement and glass would mean the destruction of this precious natural environment. The site is also of interest from an archaeological perspective, excavations have brought to the surface Romano-British houses in the Titnore Woods area of Durrington. If this is not sufficient to warn us of the detrimental effect the housing project would have in the area, lets throw in the increased risk of flooding it will cause through the destruction of Durrington's green belt, which operates as a sponge absorbing rain water; inflated traffic levels and destruction of the picturesque landscape that would be no more. Surely these reasons provide ample proof as to why we need to protect this land from further man made interference and the subsequent desolation the Consortium's agenda would cause.

The West Durrington Consortium, which represents Persimmon Homes, Taylor Wimpy and Heron Homes, initially had planned to build 875 homes. This has now being amended to a proposal of 1250 houses followed by a new road. The proposition would take a long 6 years to be made into reality at an estimated cost of over 3 billion pounds. Bargain.

This area, lamentably, has already been altered by the gargantuan Tesco being constructed just across the field from Titnore Woods. The corporate giants are looming higher and higher with each passing day, casting their dark shadow across the field onto the wood. The branch is due to throw open its iron gates sometime in February/March 2010.

In December 2009, Tesco prevented access to the public footpath leading to Titnore Woods from Fulbeck Avenue by trashing the wooden bridge at the top of the avenue. This has illegally prevented an ancient Right of Way from being used and destroyed access between the communities of Northbrook and North Durrington in one fell swoop. Any aspiring visitors to camp Titnore must now make their way along Titnore lane and enter through the track to Somerset Lake or across the fields via the top of Tasman Way.

As reported in SchNEWS (see SchNEWS 705 )Worthing Council initially planned to meet on Thursday 28th January 2010 to determine the future of Titnore. However the casting of the die has now been postponed till March. Please spread the word so everyone that was planning to come down to oppose the development plans is aware of the change of date. Until March they are plenty of ways each person can help. Here are but a few:

You can write to Councillor Paul Yallop at Worthing Town Hall Chapel Rd Worthing. Or email paul.yallop@worthing.gov.uk and object to the 'West Durrington Development that will be built on a Greenfield site - Durrington's Green Belt' or words to that effect. Please also ask him to have a local referendum on this highly controversial development.

Donations are welcome in the form of raw materials such as wood, nails, poly prop and corrugated iron, etc...

You can call by the camp to aid with the construction of defences and walkways. And at the same time gain the opportunity to wander around and appreciate the surrounding beautiful rural landscape.


Visit the website www.protectourwoodland.co.uk for more information and the latest updates.

your white flags are no match for our muskets type thing

oooops,feelin a bit fragile...website should read:
www.violetmazeadventures.blogspot.com to read about campaign to save a woodland

www.violetmazeadventuresadventures.blogspot.com
read this blog to see how people tried to save the old Garden festival site/woodland in Liverpool

we urgently need people on site as we are down to about 5 at the moment. since the plans were changed a lot of our defences have become useless and we need to move them. there are plenty of treehouses up for grabs and it could be a very defensable place if we had the people power...