Back Issues
SchMOVIES
Feature Articles
Contacts and Links
DIY Guide
Obscurities
About Us
Subscribe
"Definitely one of the best party and protest sites to come out of the UK. Updated weekly, brilliantly written, bleakly humourous, and essential reading for anyone who gives a shit. And we all should." - Radiohead
Other Reviews 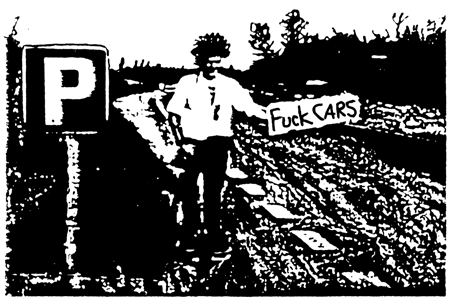 SchOBSCURITIES
Here's links to take you straight to those long-forgotten recesses of this site which might otherwise be impossible to find. This site is under (re)construction: more will be added to this section soon.
ADDITIONAL WEBSITE SECTIONS
Book And Film Reviews - 2005-2009 - SchNEWS tries its hand at book and film reviews.
SchNEWS Of The World - August 2002 - nearly all the extra articles especially written for the book - including colour pics - plus some of the satire, subverts and cartoons.
Monopolise Resistance - Sept 2001 - in September 2001 - before 9-11 - SchNEWS published a pamphlet about Globalise Resistance - the Socialist Worker Party (SWP) 'front' group who were muscling in on the burgeoning global anti-capitalist movement. The text in full is reproduced, plus there's PDF copies to download, plus 'Vampire Alert' - another pamphlet about the same subject on PDF.
SchNEWS Gandalf 6 Trial - Nov 1998 - read about the trial from 1997-98 where six people - five people who wrote for the radical magazine Green Anarchist plus the press officer for the ALF (hence GAndALF 6) were arrested and charged with 'conspiracy to incite criminal damage' for reporting direct action.

Worst Britons - May 2003 - In January 2003 we had the idea of doing a 'Worst Britons' poll, to form the basis for a satirical article in our next book. Then, after we'd put the competition up on this website we found out that Channel 4 were doing the same thing - and even using the same name (the only difference was that their Britons had to still be alive). We thought that had blown our idea, and promptly forgot about the online poll we had set up, though meanwhile plenty of people voted online. Channel 4 broadcast their results and it was so piss weak (Jordan coming in at no. 2...) that we thought we'd kick ours off again. Here's the result.
Bilderberg Papers - 1999 - Don't ask us how we got hold of these - "This booklet is an account of the 1999 Bilderberg Meeting and is distributed only to participants of this and past conferences and to prospective participants of future conferences. It represents a summary of the panellists' opening remarks for each session, and of the comments and interventions in the subsequent discussion."
Features - 2008-2011 - An online-outlet to publish articles which were longer than the 1200-odd word limit of a SchNEWS front page.
Satire - A repository of satirical graphics and other comedy material produced by SchNEWS.

EXTRA ARTICLES
About Us - Aug 2006 - a view from SchNEWS central at the end of the Metway office years.
About Justice? - 2000 - who is or was Justice?, the group that started SchNEWS...
SchNEWS 4th Birthday - Dec 1998 - the SchNEWS crew pause for breath after a fourth year...
Fifth Birthday Shocker! - Dec 1999 - Five years on and we're still here. - SchNEWS reflects on 1999...
Six Years And We Still Won't Shut Up - Jan 2001 - SchNEWS celebrated its sixth birthday with a slap-up three floor party in Brighton...
Seventh Heaven - Jan 2002 - SchNEWS turns seven.
The Word In The Trees - article from The Guardian 6th January 1997 by Alex Bellos about SchNEWS
And For Our Next Act - article written by SchNEWS writer Pete Styles published in Red Pepper September 1997 reappraising the achievements of direct action.
Thought Crime Calendar 2005 - Dec 2004 - cartoonist Nick Watson produced a calendar with all proceeds going to SchNEWS.
Putting On The Ritz - March 2011 - SchNEWS emergency bulletin on the M26 anti-austerity demos in London.
INFORMATION FOR ACTIONS/DEMOS
June 18th Links - June 1999 - Links and info in the lead-up to J18 - June 18th 1999
Storming The City - June 1999 - a four page satirical cartoon covering the events of J18 - June 18th 1999 in London, drawn by Pete Loveday using text from SchNEWS 217 (in PDF form - 1000kb).
DISSENT! G8 - July 2005 - information for those going to Scotland for the G8 Summit in 2005..
SchNEWS EVENTS

M For Media Marlarkey - May 2007 - all details including intro blurb, programme and participants of the SchNEWS Alternative Media Gathering 2007 - held May 11-13th 2007 at the Cowley Club, Brighton.
SchNEWS At Ten National Tour 2004 - April 2004 - dates and details
SchNEWS 10th Birthday - October 2004 - details of book launch, massive joint 10th party with Innerfield sound system at the Coronet, Sth London, as well as the one-day conference held at the Camden Centre called 'How Direct Action Can Save The World' during the European Social Forum in London going on at the time.