Some significant stories from the early days of SchNEWS...

Note - this site is under (re)constructon - there are still many dead links, and aspects to the site which are not working.

To contact SchNEWS email schnews@riseup.net - ignore all previous email addresses, postal addresses and phone numbers for SchNEWS listed in these back issues. 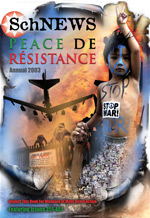 These issues are published in the book 'Peace de Resistance':
'As the Forces of Darkness gather for a new attack on Iraq, they're shaken by an unexpected explosion of resistance. US airbases are invaded; military convoys are blockaded; schoolkids stage mass walkouts from Manchester to Melbourne; roads are occupied, embassies besieged, and cities all over the world are brought to a standstill by the biggest mass demonstrations ever seen. Read about the efforts to sabotage the war machine that the corporate media ignored: not just the mass demos, but Tornado-trashing in Scotland, riots across the Middle East, and train blockades in Europe. Featuring SchNEWS 351-401, this book also covers many of the past year's other stories from the rebel frontlines, including GM crop-trashing, international activists in Palestine, and the 10th anniversary of Castlemorton. All that plus loads of new articles, photos, cartoons, subverts, satire, a comprehensive contacts list, and more…' 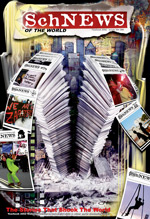 These issues are published in the book 'SchNEWS Of The World':
The temperature goes up a few notches as the earth's climate has its hottest year on record - and the corporate carve-up lifts its tempo in the paranoia and madness of September 11th. Behind the haze Argentina goes into meltdown. Israel reoccupies Palestine causing a second Intifada. Hundreds of thousands come out on the street in Genoa, Quebec, Gothenburg, Barcelona, Brussels against globalised institutions. Even larger numbers fight for their land and livelihood against neo-liberalism in South Africa, India, South America and the rest of the global south. 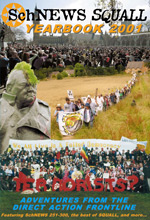 These issues are published in the book 'SchNEWS/Squall Yearbook 2001':
The Zapatistas march into Mexico City, thousands disrupt the World Bank meeting in Prague, Churchill gets an anarchist make-over: from Bognor to Bogota, Dudley to Delhi, and Kilburn to Melbourne, resistance has become as global as the institutions of capitalism. This was a year full of stories of people at the frontline of struggles worldwide, and creating sustainable solutions to the corporate carve-up of the planet.

These 50 issues of SchNEWS along with the best of Squall magazine, plus loadsa photos, cartoons, satirical graphics, subverts, and a comprehensive contacts database are available together in.... 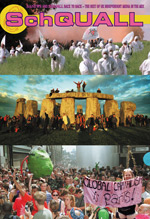 These issues are published in the book 'SchQUALL':
Genetically modified crops get trashed, animal rights, freemasons, June 18th '99 international day of action against capitalism, Exodus Collective, Cuba, the November 30th '99 Battle for Seattle, climate change, parties and festivals, indigenous peoples' resistance to multinational corporations, the privatisation of everything in sight, crap arrests of the week, prisoner support and much more…the full lowdown on the direct action movement in Britain and abroad! 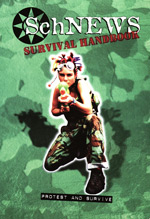 These issues are published in the book 'Survival Handbook':
Read all about it! Genetic crop sites get a good kicking; streets reclaimed all over the world; docks occupied in protest of death at work; protestors rude about multinational corporations' plans for world domination...
SchNEWS gives you the news the mainstream media ignores. Tells you where to party and protest. Tries not to get all po-faced about what's going down in the world. 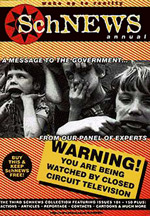 These issues are published in the book 'SchNEWS Annual':
"The McLibel trial ends, Manchester Airport second runway protest camp goes mad, eviction at Fairmile, the GANDALF Trial, anti-nuclear demos in Germany, the massive Reclaim The Streets that took back Trafalgar Square... New Labour breaking each and every promise they ever made.

These 50 issues are together with loads more pics, graphics and articles in... 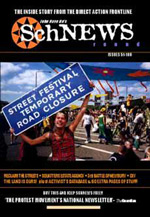 These issues are published in the book 'SchNEWS Round':
Direct Action takes over England... M41 motorway gets occupied in huge Reclaim The Streets party... The Third Battle Of Newbury... plus the national SchLIVE Tour, the Liverpool Dockers go 'direct action', resistance to Jobseekers Allowance, Exodus Collective, Trident Ploughshares women go free after smashing Hawk Jet, Selar Opencast Mine protest camp, Fairmile - A30 protest camp, Wandsworth Eco-village, the Squatter's Estate Agency...SchNEWS publishes the inside story from the activists themselves! 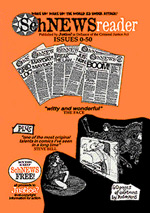 These issues are published in the book 'SchNEWS Reader':
Where It All Began...
From the pilot edition edition right through the first year of SchNEWS featuring the first of many Crap Arrest Of The Weeks, the Criminal Justice Act 'Arrestometer', and a running commentary of resistance as the sections of the Criminal Justice Act come in attacking Travellers, Squatters, Hunt Sabs, Ravers, Protesters, Footie Fans and freedom in general. In the news was... Shoreham Live Animal Export protests, the end of the No-M11 Link Rd campaign, Pollok Free State anti-M77 protest in Glasgow, eviction of Stanworth Valley 'village in the trees' near Blackburn against the building of the M65, opencast mining protest camps in South Wales and much more...

These historic 50 issues of SchNEWS, plus loadsa cartoons by Kate Evans and more are available in...

SchNEWSreader
SOLD OUT Rare as hen's teeth. But you can read all of these early SchNEWS issues here - and if you really want to see em as they were you can download some of them as PDFs. 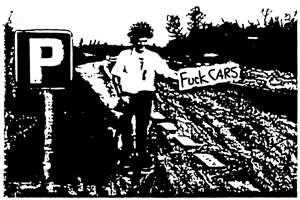 Portal page to take you to the dark corners of the site to find those long-forgotten extra side projects and articles. click here
FOR INSTANCE...
SchNEWS Of The World - All additional articles from the 2002 book click here
Gandalf Trial - Extra coverage of the 1997-98 trial of people working for magazine 'Green Anarchist' and the press officer of the ALF - hence 'GandALF' click here
Worst Britons - SchNEWS' riposte to the BBC's cloying 'Great Britons', voted by our readers, using their acerbic denouncements of national heroes. click here
M For Media Malarkey - online info to accompany the radical media gathering SchNEWS held at the Cowley Club, Brighton in May 2007. click here
Monopolise Resistance - A pamphlet produced by SchNEWS in 2001 warning about Globalise Reistance - the SWP's front group for co-opting the anti-global capitalist movement. click here
Features - A series of longer articles published 2008-2011 click here
Book Reviews - SchNEWS tried its hand at book and film reviews, circa 2005-2009. click here
see the rest here